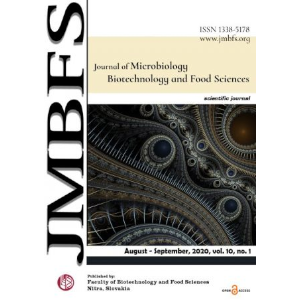 Anotace: Globodera rostochiensis (Cyst nematode-DDH1) is a major pathogen of potato, this type of nematode was recently reported in Egypt in 2017 as a serious plant pathogen especially in Alexandria and El-Behera governorates. This study aimed to identify this species (G. rostochiensis) on the molecular level in addition to examine the plant-cyst nematode interaction. The results of ITS-PCR showed two bands with molecular sizes 238 bp and 370 bp. The small band is identified as internal band for the large one. The sequence analysis was conducted on 238 bp amplicon and the results obtained confirm that the obtained DNA sequence belong cyst nematodes (G. rostochiensis) with similarity 77%. The constructed phylogenetic tree based on the DNA nucleotide sequence showed close relationship with a Japanese G. rostochiensis (AB207271). The functional transcriptome of the infected and non-infected potato plants was analyzed using Differential Display- PCR technique and about 57 up regulated and 22 down regulated genes. Seven genes (2 downregulated and 5 upregulated) were chosen at random and sequenced. The nucleotide sequences observed that the two down regulated genes were; Chitinase domain containing protein 1 and N-like putative resistance protein. Whereas, the five up regulated genes were; Glucan endo 1,3 beta glucosidase A precursor, STS 14 protein gene, Phytoalexin deficient 4-1 protein gene, PEN1 gene and Linoleate 13S lipoxigenase 2-1, chloroplastic like, respectively. We can concluded that the regulation changes occurred for some pathogen related genes in systemiclly acquired immunity of infected potato plant compared with control were the main observation. Moreover, the cyst nematode could be able to suppressd some of plant defense system genes and inducing another in the same time.