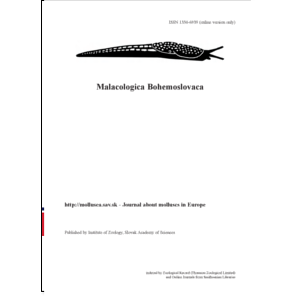 Anotace: The Kalábová (K1) and Kalábová 2 (K2) Nature Monuments are located in the central part of the White Carpathians PLA near the village of Březová. Both monuments protect treeless wet grasslands and tufa forming spring fens, which were originally part of a larger wetland complex. A total of 51 species were recorded in K1 (47 terrestrial and two aquatic gastropods and two bivalves). Of these, 30 species (56%) are woodland dwellers that were recorded during the survey in 2000, shortly after the area was logged. In contrast, none of these species was detected during the recent survey in 2021. However, these species are widespread in the region and Nature Monuments surroundings and some are likely present also in the ecotones of the spring meadow and adjacent forest. Currently, hygrophilous and wetland dwellers dominate (9 spp.; 17%), followed by ubiquitous (7; 15%), open-ground (4; 8%) and aquatic species (4; 8%). At K2, 19 species were recorded, including 15 terrestrial and two aquatic gastropods, and two bivalves. The two most species-rich ecogroups were hygrophilous and wetland dwellers (5; 26%) and woodland dwellers (5; 26%), the latter were prevailing probably due to relatively recent deforestation between 2012–2014. Aquatic species were represented by four species (21%), followed by three ubiquitous (16%) and one open-ground (5%) species. The spring dweller Bythinella austriaca (NT) and the declining wetland umbrella species Vertigo angustior (VU; NATURA 2000) inhabited both localities in high densities. To maintain the favourable habitat conservation status of the reserves, the sites should be managed extensively by grazing or mowing.