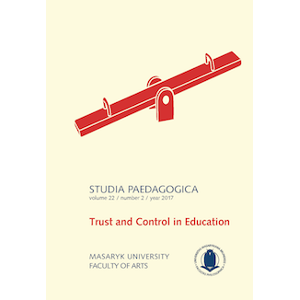 How to move beyond the trust–control dilemma?

Anotace: Debates on educational standards often take the form of an either–or discussion. Either they are seen as an instrument that enhances educational quality and transparency, or they are criticized for such adverse effects as deprofessionalization, fragmentation, and reductionism. In this article, we try to move beyond this dilemma by shifting the focus away from what standards are (their content) or what they are for (their goal or intentions) and toward a detailed study of what standards do in particular settings. Building on a case study of the Flemish teacher career profile "in action" (Ceulemans, 2015; Latour, 1987), we present six mechanisms for standardizing work. First, for standards to have an effect, they need a specific type of user (as otherwise they are just a piece of paper no one cares about). Second, the more a standard allows for versatile use, the more powerful its effect will be. Third, once people identify with a standard in what they say and do, its effect tends to go unnoticed, which, fourth, often implies a shift in control between the standard and its user(s). Fifth, the capacity to control lies within (those working with) the standard, not in the hands of those behind the standard. Sixth, building on the fifth, what a standard does depends on what and who it relates to. If we want to grasp educational standards and what they do in education, therefore, we have to know more about how exactly they come to work. Opening the black box of educational standards, we argue, makes it possible to repeatedly discuss which role(s) standards (are to) play in education, whether these standards do what those working with them—teachers, school principals, teacher educators, educational researchers, experts, and policymakers—expect them to do, and, if not, how their working conditions need to be altered.