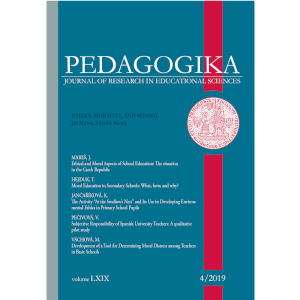 Anotace: Abstract: Th e theoretical part of the paper introduces environmental ethics and points out its most frequent issues. It shows that the objective of education is to support pupils in their autonomous decision making. Th e objectives of this research study were a) to implement the environmental activity “At the Swallow’s Nest” with primary school pupils and to verify its functionality, b) to find out what decisions were taken by pupils and how these decisions were justified, and c) to discover what influenced the pupils’ decision making. For these purposes, the method of action research was used, based on records of children’s statements, a description of their behaviour, and a questionnaire survey. Overall, the author conducted the activity with 380 primary school pupils. Th e questionnaire was collected from 158 pupils. Th e results show that: (a) primary pupils can already discuss environmental problems and learn how to solve them; b) the pupils’ decisions are influenced by a number of variables, c) there is no correlation between a decision and any of the controlled variables (age, family background, religion, etc.). A single dependency was detected, namely the dependency on the group (if it was a permanent group), which (given that the voting was anonymous) can be interpreted as the influence of the class teacher on their pupils’ decisions. Conclusions: Although solving similar types of activities is not common in the conception of environmental education in Czech schools (let alone on the primary school level), similar pedagogical interventions seem to be a suitable tool in environmental moral education.