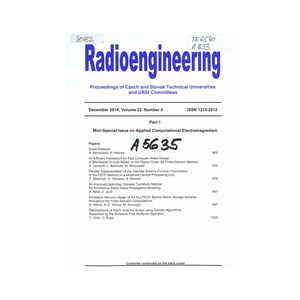 Anotace: In the fifth-generation (5G) mobile system, new millimeter-wave technologies such as small cell size and multibeam operation are introduced at the base station. Currently, linear array antennas are used at base stations, however higher design complexity and increased losses in feeding network are expected when the same technology is used to produce multibeams in 5G operation. Through a suitable configuration, a dual-reflector antenna system seems to be a promising candidate to replace the currently used array antennas due to the feasibility of achieving high gain and good multibeam characteristics. In the previous authors’ work, in order to increase the antenna gain at on-focus beams, a reflector shaping method was applied to the dual-reflector antenna, and constant phase and adequate amplitude distribution were achieved on the aperture plane. Furthermore, a good multibeam performance was validated through the consistency of multiple off-focus beam patterns, where a shaped spherical reflector antenna has been used. However, during off-focus conditions, spherical aberration has degraded the phase distribution on the aperture plane and caused reduction in the antenna gain. In this paper, modification to the reflector shaping method using equivalent parabola and equivalent circle method is performed to achieve a reflector antenna system having a constant phase distribution on the aperture plane. The idea of modifying the reflector shaping method comes from the equivalent parabola concept in the Cassegrain dual reflector antenna. During modification, first, the equivalent parabola and circle equation is implemented in the reflector shaping algorithms. Second, a Matrix Laboratory (MATLAB) program is developed in order to solve the reflector design equations and to obtain the main and sub reflector shapes. The MATLAB program is able to generate ray path, aperture illumination distribution and radiation pattern to estimate the adequacy of the reflector shaping results. In the final step, multibeam performance is validated using an electromagnetic simulator, FEKO. Through comparison of the equivalent parabola with the equivalent circle reflectors, an antenna efficiency of 67.6% is obtained and better multibeam radiation patterns are demonstrated using the equivalent circle reflector. Therefore, the usefulness of the newly developed shaping method employing equivalent circle reflector is ensured.