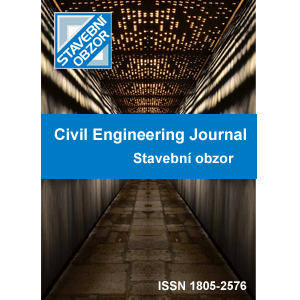 Anotace: This study assesses the geotechnical properties of lateritic soil stabilized with the ashes of

oil palm fronds. These properties are then compared with those of the same soil stabilized with
cement to determine how well the ashes perform since cement is considered to be the best
stabilizer. Laboratory tests such as specific gravity, moisture content, Atterberg limits, particle size
distribution, compaction, unconfined compressive strength (UCS) and California bearing ratio
(CBR) tests were first carried out to determine the basic properties of the lateritic soil (without the
stabilizers). Based on the results of these tests, the soil was classified according to AASHTO soil
classification system as an A-7-5 soil which is a poor soil. Hence, the need for stabilization.
Thereafter, strength tests such as California bearing ratio (CBR), unconfined compressive strength
(UCS) and compaction tests were performed on the soil to which the ashes and cement were
added in percentages of 2, 4, 6, 8 and 10 by weight of the lateritic soil. The compaction test
showed that the highest maximum dry densities (MDD) were recorded in the case of the oil palm
frond ash (OPFA) and cement at 4% (MDD = 2.02kg/m3 ) and 6% (MDD = 2.40kg/m3 ) respectively.
The highest CBR values obtained were 32.6% and 87.32% at 4% OPFA content and 6% cement
content respectively.The unconfined compressive strengths (UCS) of the soil were highest at 4%
OPFA content (234.86kN/m2 ) and 6% cement content (588.32kN/m2). The chemical tests
performed on the OPFA and the cement showed that the highest oxide component were SiO2
(33.67%) and CaO (60.83%) respectively.
Zobrazit více »