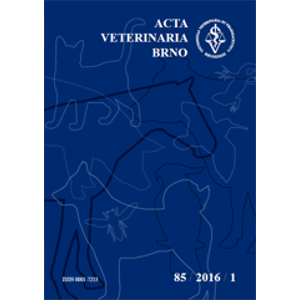 Anotace: The present study compared the quality characteristics of boar semen diluted with three extenders of different proposed preservation times (short-term, medium-term and long-term). A part of extended semen was used for artificial insemination on the farm (30 sows/extender), while the remaining part was stored for three days (16–18 °C). Stored and used semen was also laboratory assessed at insemination time, on days 1 and 2 after the collection (day 0). The long-term extender was used for a short time, within 2 days from semen collection, with the aim to investigate a possible advantage over the others regarding laboratory or farm fertility indicators at the beginning of the preservation time. Viability, motility, kinetic indicators, morphology and DNA fragmentation were estimated. The results showed reduced viability, higher values for most of the kinetics, and higher immotile spermatozoa from day 1 to day 2 in all extenders; however, the long-term extender was superior compared to the other two on both days. With regard to morphology and chromatin integrity, the percentage of abnormal and fragmented spermatozoa increased on day 2 compared to day 1 for all of the extenders. However, based on the farrowing rate and the number of piglets born alive after the application of conventional artificial insemination within 2 days from semen collection/dilution, it was found that the medium-term diluents were more effective. In conclusion, it seems that the in vivo fertilization process involves more factors than simply the quality of laboratory evaluated sperm indicators, warranting further research.