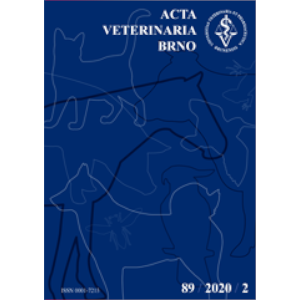 Anotace: The objective of this study was to assess the udder health in lame dairy cows. The study was performed on 35 dairy cows which were admitted to the Clinic of Ruminants. The most frequent claw diseases were white line abscess (28.6%) and toe necrosis (28.6%), followed by digital dermatitis (17.1%), toe ulcers (14.3%), and sole ulcers (11.4%). The prevalence of mastitis in lame cows was 74.3% (26); clinical mastitis was detected in 5 (19.2%) and subclinical mastitis in 21 (80.8%) dairy cows. Distribution of mastitis was similar in terms of front (52.54%) and rear quarters (47.46%). For statistical analyses of mastitis grade in lame dairy cows, a six-point Mastitis Score was created based on physical examination of the mammary gland and results of California Mastitis Test. The Mastitis Score tended to be higher in cows with corium inflammation than in those with digital dermatitis (10.0 and 6.5, respectively). Microbiological culture of 24 positive milk samples was performed and intra-mammary pathogens were isolated in 18 (75%) samples. The most prevalent bacteria were coagulase negative staphylococci (50%), followed by Enterococcus spp. (16.7%), Proteus spp. (11.1%), and Aerococcus viridians (11.1%). Of the total bacteria, contagious pathogens were determined in two milk samples (11.1%). In conclusion, high prevalence of mastitis was detected in lame cows suffering from claw diseases without a significant effect of the type of claw diseases on the mastitis grade. Moreover, the dominating isolation of environmental pathogens may be a result of longer lying period of animals affected with lameness.