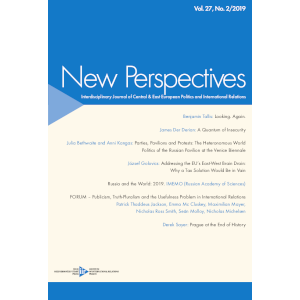 Anotace: In the 1970s Jagdish Bhagwati proposed the introduction of a brain drain tax to compensate

less developed countries for the welfare losses they suffered as a result of outward skilled migration,
but the proposal was never implemented. In light of tensions in Europe caused by
the mobility of highly-skilled labour from ‘East’ to ‘West’ following the 2004 EU enlargement,
this paper re-examines the feasibility of such a proposal within the Union. The disparity between
levels of income and economic development in (some of) the ‘new’ and ‘old’ member
states, combined with the specific European institutional environment to trigger a brain
drain from the accession countries to the EU-15. Mindful of the values and specificities of the
EU, I address the question of whether Bhagwati’s brain drain tax could provide a solution to
this problem in the European context. Combining empirical research with EU integration theory,
I argue that it cannot: implementation would face obstacles even in the limited context
of the EU because of the lack of appropriate supranational competences; moreover, the tax
– as a compensation mechanism – could not reduce the major differences in development
levels, which is the underlying cause of the problem. Nonetheless, addressing this question
illuminates broader issues of the politics of enlargement and the inequities of the current EU,
in spite of the benefits it has brought to its 2004 and 2007 entrants.
Zobrazit více »