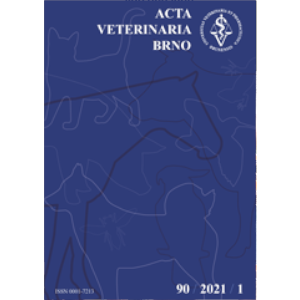 Anotace: The aim of the study was to estimate the effect of rapeseed pomace and extruded full-fat soya in the diets of dairy cows on changes in the milk fatty acid (FA) profile. The experiment was carried out on 30 dairy cows and divided into two periods: the indoor feeding period and the grazing period. Control diet cows were fed the farm’s total mixed ration (TMR); cows of experimental group 1 (ES) cows were fed the farm’s TMR supplemented with extruded full-fat soya; cows of experimental group 2 (RP) were fed the farm’s TMR supplemented with rapeseed pomace. The total content of saturated fatty acids (SFAs) tended to be lower in the RP and ES groups than in the control group during both feeding periods. Our results suggest that supplementing diets with rapeseed and soybean products are both effective in improving the fatty acid proportion of desirable (hypocholesterolaemic) FAs, mainly oleic acid (18:1n-9), linoleic acid (18:2n-6) and conjugated linoleic acid (CLAcis9trans11). The study showed that during the indoor feeding period, the unsaturated fatty acid (UFA) contents were significantly higher in the ES group compared to the control group (P < 0.05). The nutritional value of milk from the feeding groups in which rations were supplemented with ES or RP was better due to a quartile reduction of the atherogenicity index (AI) and the significantly increased spreadability index (SI) of the butter manufactured during the indoor feeding period (P < 0.01).