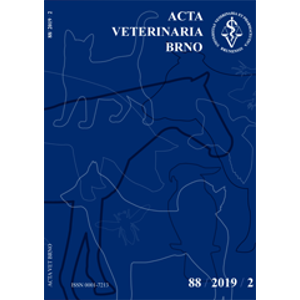 Comparison of the welfare of laying hens, broiler chickens and turkeys in terms of bird health as surveyed during inspection in slaughterhouses

Anotace: During the period 2010–2017 we monitored 17 346 183 laying hens, 887 994 167 broiler chickens and 919 843 turkeys slaughtered at slaughterhouses in the Czech Republic. In cooperation with the State Veterinary Administration, we recorded findings detected in slaughtered birds within the post mortem veterinary inspection. We analysed the total number of patho-anatomical findings (of intravital origin) and the number of findings divided into acute, chronic and traumatic diseases. In hens, the total ratio of the number of patho-anatomical intravital findings to the number of slaughtered birds (index) was found to be 0.378. This index of the incidence of patho-anatomical findings in hens was higher (P < 0.001) than that found in broilers (0.016) and turkeys (0.101). The prevailing findings in hens were chronic changes (26.32%), followed by acute changes (5.29%), but also notable were traumatic changes (3.90%). Compared to the findings in broilers which were divided into chronic (0.34%), acute (0.10%) and traumatic diseases (0.02%) and turkey findings which were broken down into chronic (7.60%), acute (0.16%) and traumatic diseases (0.33%), the findings of acute, chronic and traumatic diseases were higher (P < 0.001) in hens than in broilers and turkeys. These findings show that the health condition and hence the welfare of laying hens as reflected in the patho-anatomical findings during the veterinary inspection of slaughtered birds is significantly worse than the health condition of broilers and turkeys. This demonstrates the need for increased care for laying hens both on farms and in transit to the slaughterhouse.