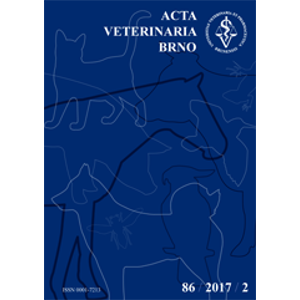 Anotace: Interleukin-1 (IL-1) is the most important cytokine in the inflammation cascade activation in all tissues and is present in acute and chronic phases of inflammation. By blocking IL-1 binding to target cells, numerous inflammation processes are prevented. The use of autologous conditioned serum rich with IL-1 receptor antagonist protein (IL-1Ra) is a novel treatment method of tendon inflammation in domestic animals and humans. Injections of autologous conditioned serum (ACS) have demonstrated clinical efficacy and safety in animal models and humans in the treatment of osteoarthritis, disc prolapse and muscles and tendons injuries with low side effect. Neutropaenia, reduced white blood cell count, and infections or local irritations are described as side effects of IL-1 antagonist use in humans. Therefore, a study of blood changes in rabbits after local administration of IL-1Ra in the Achilles tendon tissue after iatrogenic inflammation was conducted. Interleukin-1 receptor antagonist protein was used to prevent and reduce tendon inflammation after longitudinal tenotomy. The study was done on 26 white Californian rabbits, divided into two equal groups consisting of 13 animals each; the experimental interleukin-1 receptor antagonist protein (irap) group, and the control group. In the irap group, autologous serum rich with IL-1Ra was used (Orthokine®vet irap, Alfa-Arthro, Croatia). Differences between two groups were considered significant as changes in the blood for certain blood elements at P < 0.01. The P value was P = 0.0153 for the white blood cells, P = 0.00153 for neutrophils, P = 0.00017 and for platelets. In the control group, an increased platelet count was noticed in 70% of blood samples and a decreased neutrophil count was found in all of the irap group samples at the end of the study in comparison to the initial blood count prior to application.