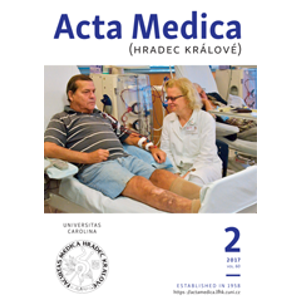 Anotace: We present a case of severe calciphylaxis in both thighs and calves in a patient with end-stage renal disease and advanced secondary hyperparathyroidism with successful outcome after modified therapeutic approach. The cause of calciphylaxis is multifactorial. In our case, not only severe hyperparathyroidism and mediocalcinosis, but also medication (warfarin, calcium and active vitamin D) was involved. Because the initial conservative therapy was not successful, we indicated parathyroidectomy. However, we were not able to localize parathyroid glands and we contraindicated bilateral neck exploration due to the patientʼs critical status. Therefore, we decided for total thyroidectomy with total parathyroidectomy. Surgery was uncomplicated and histology confirmed that all four parathyroid glands were removed. The expected post-operative hypocalcaemia was asymptomatic and we did not use any calcium supplementation or vitamin D. Thyroid hormone replacement was easy. After surgery, the large and multiple subcutaneous defects started to heal. We achieved complete healing within several months of continuing dedicated care. There is no recurrence after three years. Prompt and radical surgical parathyroidectomy was extremely useful in our patient.