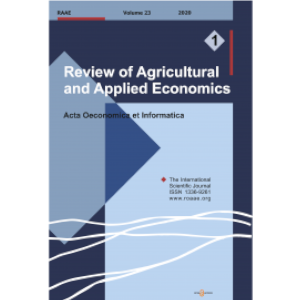 Is Increasing Input Use For Rice Production A Profitable Proposition In Tanzania?

Anotace: Demand for food staples particularly rice has been increasing tremendously especially in Sub-Saharan Africa relative to supply attributed by a continued rise in population. The shortfall in supply is generally considered to be caused by low use of inputs particularly inorganic fertilizer and improved seed among others. Meanwhile, there is limited empirical evidence to support this notion. This paper aimed at estimating the profitability and yield response to inorganic fertilizer and improved rice seed using cross-section data collected from 256 smallholder rice farmers in Mbarali district -Tanzania. Data was analysed using treatment effect model while instrumental variable was used for robustness check. Results shows that inorganic fertilizer use in the study area is not low as generalized by previous studies. It was further revealed that increasing fertilizer and seed use by 1 kg leads to an increase in yield by 6.2 kgha-1 and 9.2 kgha-1 respectively. Furthermore, rice production is a profitable business though low marginal physical product and high fertilizer price significantly reduce the profitability of fertilizer use. Thus, reducing input costs through well-managed subsidy programs, timely accessibility of inputs coupled with irrigation facilities and good agronomic practices are crucial for sustainable and profitable agricultural development.