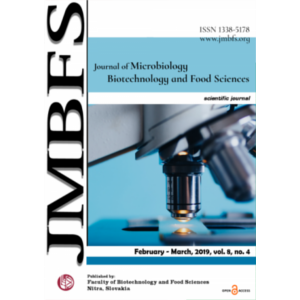 Anotace: The objective of this study was to produce a low-fat mayonnaise containing gelatin from bighead carp by-products as a fat replacer. Low-fat mayonnaise samples were made by substituting the oil with fish gelatin at 0% (T0), 10% (T10), 25% (T25), and 40% (T40). Also, some physiochemical properties and sensory qualities of reduced fat mayonnaises were investigated. T40 had the lowest caloric value while, the lowest whiteness was measured in T40 (46.12%) compared to the control group (79.58%) (P<0.05). The reduced fat in T40 samples presented high values of texture properties as well as the highest hardness, adhesiveness and resilience (P<0.05). Also, the highest level of emulsion stability was reached in T40 treatment (P<0.05). The highest and the lowest titratable acidity were recorded in T0 (0.85%) and T40 (0.60%) treatments, respectively. The results of sensory evaluation in term of overall acceptability showed that T40 had the highest score compared to other treatments. This study revealed a good potential usage of the fish gelatin as a fat mimetic in low-fat mayonnaise formulation up to 40%.