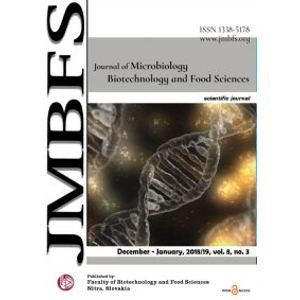 Anotace: The objective of this study was to determine the aromatic profile of red wines obtained from Rubin, Storgozia, Bouquet, Trapezitsa, Kaylashky Rubin and Pinot Noir varieties from the region of Central Northern Bulgaria. First five varieties are hybrids selected in the Institute of Viticulture and Enology (IVE). Pinot Noir was used for control. GC-FID study for determination of the aromatic profile of red wines from proposed varieties was conducted. Twenty four volatile compounds were identified: 9 esters, 8 higher alcohols, 1 aldehyde, 5 terpene alcohols. The presence of methyl alcohol in all wines were found. Its concentrations were normal for red wines. The highest total content of volatile compounds was found in the wine from Kailashky Rubin variety (693.97 mg.dm-3). The ester fraction was dominated by ethyl acetate. The highest total ester content was found in the wine from Pinot Noir variety (204.08 mg.dm-3). It was followed by the wine from Bouquet variety (195.75 mg.dm-3). Acetaldehyde was the major established aldehyde. It was found in the largest quantity in the wine from Trapezitsa variety (87.44 mg.dm-3). 2-methyl-1-butanol (active amyl alcohol) and 3-methyl-1-butanol (isoamyl alcohol) were found in the highest content from the higher alcohols fraction. The highest total content of higher alcohols was found in the wine from Rubin variety (379.38 mg.dm-3). Five terpene alcohols were identified in the wines. Geraniol was presented in all examined wines. An extensive aromatic characterization by gas chromatographic analysis of red wines obtained from grapevine varieties selected in the Republic of Bulgaria was carried out. The research proves that the red wines obtained in the conditions of Central Northern Bulgaria were characterized by a complex aromatic composition due to the presence of different esters, higher alcohols and terpenes.