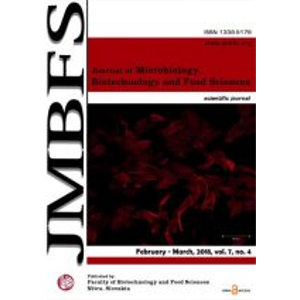 Determination of micro and trace elements of commercial beers

Anotace: In the present paper, a risk analysis of beer’s element content has been carried out. Al, As, Ba, Cd, Co, Cr, Cu, Fe, Mo, Mn, Ni, Se, Sr, Pb and Zn were determined by Inductively Coupled Plasma Mass Spectrometry (ICP-MS) in 24 beer samples produced by different breweries. Samples could be originated from Hungary, Belgium, the Czech Republic, Germany and Austria, and the set consisted of 4 types of beer: pale barley, dark barley, pale wheat and dark wheat samples. It appeared that Mn was the most abundant among the analysed elements, followed by Sr, and Al, and Co, Se and Cr could be found in the lowest concentrations, except for those which were present in a concentration lower than LoD.Zobrazit více »
The statistical analysis showed that barley and wheat beers could be differentiated according to their Mn and Cu content, but to separate all of the groups analysed further investigations and more samples are needed.
A risk assessment for Al, Cu and Zn has also been performed for the analysed samples. The results showed that none of these elements could have any adverse effect on our health. The assessment of other toxic elements was not needed, because their concentrations were under LoD, or their PTDI values have been withdrawn by WHO JECFA.